An Instrument for traveling

The noble version of the Xaphoon

The History of the Xaphoon

Pan, the unremitting lascivious god of the shepherds pursued his favorite nymph, Syrinx. She fled into the reeds near the bank and had herself transformed into reeds shortly before Pan could catch her. So instead of the delicate nymph, he only had a reed in his hand and initially he breathed into it with disappointment and then with amazement because this produced strangely heavenly sounds as could only come from his Syrinx. This is how the shepherds of ancient Greece told the history of the origin of their panpipe. 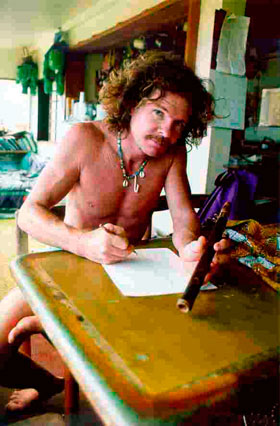 Brian Lee Wittman from Hawaii did the same as Pan by choosing a piece of bamboo to build his flute. Thus, he became the inventor and the producer of the Xaphoon!

In the past 25 years, Brian Lee Wittman produced more than 40,000 Xaphoons and this was due to a single instrument that he put together with a child based on a strange idea. The small boy lived with his mother in a tent somewhere in the forests and had heard him play the saxophone one time, the expensive version made of metal. He approached slowly and respectfully and then asked loudly and bravely if he would have a smaller one for him that he could play. Why not?

In a short time, Brian was blowing on a small recorder, which he had carved himself from bamboo. It had a thin gaspy sound and didn't satisfy either one of them. Brian had a small grindstone, which he used to form some wooden boat parts, and in a flash of inspiration he held the recorder on the grindstone and ground the entire corner of the mouthpiece into a saxophone "mouthpiece." A piece of string held the strip of reed on the mouthpiece and he blew into it and it "screeched!!!" The little boy was absolutely excited and couldn't wait to get a hold of the new instrument so he gave it to him.

But he immediately made himself a new one and this time a little longer than the last one, but made the mouthpiece first to be able to hear the standard pitch before he set the interval for the holes. Finally, he succeeded in getting a usable scale in E, but he couldn't get it any lower at first.

Brian played the instrument with just one hand as he drove into the city, but didn't notice that his speedometer was showing 80 miles an hour until he then heard the sirens. He got to the practice room where he met the local hero, Mr.  Airto Morierra, the Brazilian percussionist, who was just having a jam session with Brian's illustrious band members. He immediately joined in with his new "howler" and found that it sounded very good with its warm full tone in a band with nothing but electrical instruments. Airto was fascinated so Brian gave him the second instrument as a sign of his high esteem for Airto's music. He made a third one and played it at performances. People came to him and asked him about the instrument: "...where did you get it?...You made it? Can you make me one too?...What do you think, do you have time? Here's  my money!"
Thus, this became a business.

Finally, Brian moved in order to be closer to the bamboo forests and applied for a patent in some countries. He answered his mail, took care of the orders and the years passed. His children came to live in a house that was paid for with bamboo saxophones and heard this instrument even in their mother's womb. In the meantime, the Xaphoon is spreading around the entire globe. It is being introduced in the most differing of musical directions from baroque to Peruan, Irish and African and including new music. We are happy every time we receive an order from an area, where we don't suspect an Xaphoon, or we receive new recordings.

The young boy would probably find it funny íf he find out what he started with his curiosity.and it "screeched!!!" The little boy was absolutely excited and couldn't wait to get a hold of the new instrument so he gave it to him.

But he immediately made himself a new one and this time a little longer than the last one, but made the mouthpiece first to be able to hear the standard pitch before he set the interval for the holes. Finally, he succeeded in getting a usable scale.

We use cookies on our website. Some of them are essential for the operation of the site, while others help us to improve this site and the user experience (tracking cookies). You can decide for yourself whether you want to allow cookies or not. Please note that if you reject them, you may not be able to use all the functionalities of the site.